We are proud to announce the success of the Mediterranean Conservation Society, a COMDEKS grantee and partner in Turkey, in winning the 2014 Equator Prize. The Equator Initiative is a UNDP-led partnership dedicated to supporting and advancing local sustainable development solutions aimed at increasing economic and ecological resilience. The Prize is awarded every two years to honor outstanding local efforts towards poverty reduction through conservation and sustainable use of biodiversity. The Mediterranean Conservation Society was selected as one of thirty-five winners from 1,234 nominations from over 120 countries across the world. The Equator Prize 2014 winners will be honored at a high-level ceremony at Lincoln Center in New York on Monday September 22, 2014 as a kick-off to the UN Secretary-General’s Climate Summit.

In response to the destruction of marine ecosystems, declining fish diversity and abundance, and shrinking economic returns for fishermen due to unsustainable fishing practices, the Mediterranean Conservation Society has created a framework and methodology for establishing community-based enforcement strategies of “No Take Fishing Zones” (NTFZ). Although the Network of Gökova Bay NTFZ was established in 2010 to support local fishermen and fisherwomen, illegal fishing continued due to a lack of effective management and enforcement within the NTFZ network.

Aiming to engage the fishing community, the Mediterranean Conservation Society’s framework positions local stakeholders at the forefront of marine biodiversity conservation by allowing them to communicate, in their own language, the benefits of these NTFZ and by introducing a marine patrolling model, developed in close cooperation with the Coast Guard and Fisheries and Aquaculture Departments.

Since the Mediterranean Conservation Society began its efforts in Gökova Bay, fishing stocks have grown dramatically, as have the average incomes of cooperative members. Patrolling activities have also contributed to the protection of marine species diversity such as in Boncuk Cove, one of the NTFZs which is the only known place for endangered sandbar sharks breeding in the Mediterranean. Additionally, the community-based enforcement network of the NTFZ zones has led to the promotion of alternative livelihoods such as pescatourism, which reduces fishing pressure on the ecosystem and allows community members to enjoy more economically sustainable lifestyles. 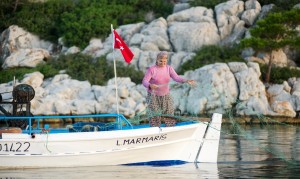 The community as a whole now feels the responsibility of protecting NTFZs, enhancing communication channels between government officials and local constituents working cooperatively to enforce the NTFZ as well as empowering women to become professional members of the fishing cooperatives and participate in the management.

To learn more about our COMDEKS activities in Turkey, please click here.

New! The latest issue of the COMDEKS newsletter is now available here.